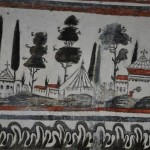 In the total decoration, between the horizontal bricks there are other bricks that compose various forms. Stone plates are mostly used, in various geometric shapes, to decorate the facets, to enclose the higher parts of the wall-building.

WALL BUILDING
The wall building is described as equally structured and uneven. Stones are used in their natural shape, and they are enclosed with ceramic plaster. The main arrangement of the structure consists of horizontal brick lines that are separated from each other by two or more brick lines. 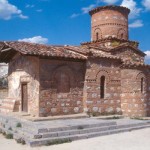 In the architecture of the almost eighty temples that are preserved until today, we can observe three typologies: – Tricorn temple with adome -Triflexed arch-roofed basilica -Wooden-roofed, one-room stretchertemple.

The great development of church architecture in the region of Kastoria in the mid-Byzantine period resulted to the parallel flourishing of hagiography. Today in the department of Kastoria there are 80 temples preserved, from which 26 are Byzantine and possess about 3.000 square meters of frescoes while all the churches possess rare samples of Byzantine icons and woodcut temples of inestimable artistic value. The main feature of the icons saved is that the imaging of one or more persons is given in a conventional space without any naturalism and geometric perspective while the emphasis is given to the transcendent and the supernatural of the persons. 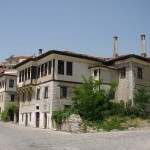 The mansions are building of the 17th and 18th century and they present great interest for their wallbuilding, their architecture and their painting, while they stand out for the imposing presence and the grandeur of their unusual construction. The mansions were built in the era where Kastoria presented a great economic growth as a result of a great commercial and manufacturing activity of the fur-makers of Kastoria in Greece and abroad. The mansions, witnesses of the economic prosperity and the cultu-ral growth, are characterised by safety and comfort and they constitute, today, unique pieces of thetraditional architecture of the modern years.

CUSTOMS – CULTURAL MANIFESTATION
Today, the inhabitants df-Kastoria have managed to keep untouched the morals and ‘customs, as elements of our folk culture. This reviving is
realised through organised groups, the Local Authorities and the cultural institutions. The most characteristic manifestations that revive older customs are the carnival of Kastoria (Ragoutsaria 6-8 January), the “boubounes” (carnival fires in the neighbourhouds accompanied by festivities and traditional dances), the festival of Prophet Elias, the patron saint of the furmakers. Today, new manifestations are added to the already existing, ones, as the “Orestia”, the week of the emigrant of Kdttoria and the cultural August while in the first weekend of August, on the riverbanks of Aliakmonas organised the “River Party” a great, manifestation, in open air with the participation of famous artists, which concentrates a great number of visitors from throughout Greece.