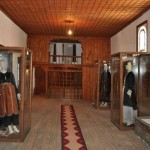 It is the museum where safeguarded traditional local costumes of men and women. It is lodged in the mansion of Emmanouel Brothers and possesses an important collection of traditional costumes of Kastoria city and the wider region. Its operation is based on the effort of the musical and philological club “ARMONIA“, which works and sees for its enrichment and its completion. 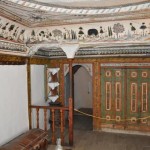 The articles of the museum concern items used in older times and they are connected to the activities of the people of Kastoria in their homes. their work, their leisure and their social life. The articles concerning the fur process are remarkable. The pavilion is divided into three areas, the kneading room, the larder and the winecellar. 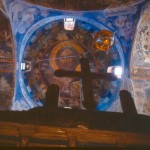 The Byzantine Museum of Kastoria exhibits articles of the Byzantine erafrom the 12 1h to the 17 1h century. The articles concern mainly portable icons, excellently maintained, which have been collected from lots of Byzantine churches of that region and they constitute rare samples of the Byzantine art. The signs of influence of the Cretan School (15″ century) are obvious on the sculptures and the frescoes. (Tel.0467-26.781). The Byzantine museum contains one of the most complete collections of Byzantine Hagiographies, portable icons and ecclesiastic art that one could find anywhere in the world.

Around 550 icons are guarded in the Byzantine Museum of the city. The icons represent isolated persons or many-member scenes in a conventional space, in such away that removes all their naturalism and determines their transcendence. The ideal in this case istheabsolute resemblancewith the original.

A key element of the Byzantine art is the absence of geometrical perspective. The faces are not illuminated from any particular source, but according to the painter’s judgement, only at the sarcomas. There are no figures close to natural on the contrary the supernatural is stressed.

7.500 year ago a group of people chose the south bank of the lake to build with wood and clay a village in or very close to the lake. This Neolithic community confronts it for hundreds of years the challenges of the ecosystem of the region by developing a broad spectrum of activities and a special civilisation.

The excavation research that the group of Mr G. Ch. Chourmouziades, professor of AUTH, started in 1992 brought to light lots of significant findings. Though the study of these findings there was an effort of reconstructing the image of the prehistoric lake settlement and creating the first Greek Settlement Museum.

The Settlement Museum of Dispilio goes beyond the limits of a conventional archaeological exhibition and transforms the archaeological information to a place where one can experience it. In area of 20.000 square meters that represents the ecosystem of the lake settlement, the visitor has the possibility to walk on the wooden platforms of the village, to see the households of the 6th millennium BC and to see closerthe life of the Neolithic inhabitants.

The representation is surrounded by reception and recreation areas and reflects a modern concept of museums on the level of using the archaeological information.